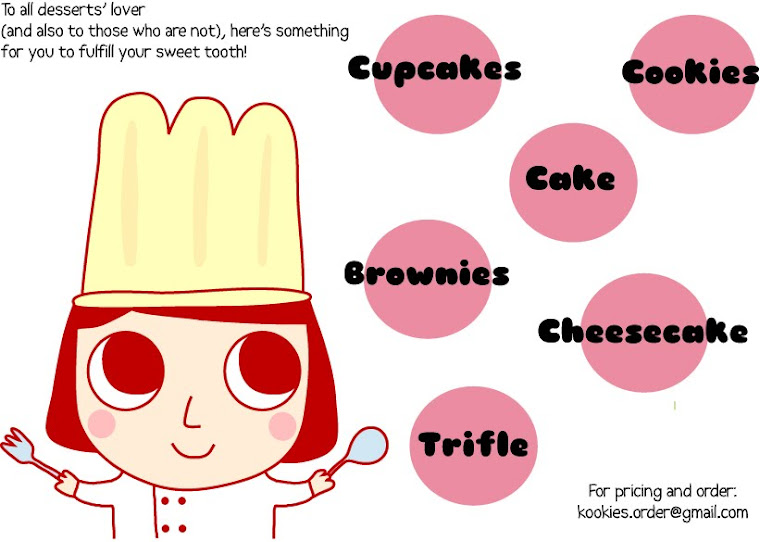 Don't you just love the smell of cinnamon in your cakes?

One sniff, and I'll be in heaven. Seriously, I used to hate cinnamon. What's with cake and spices?

Now I rummaged through my notes and recipes book for any cakes, with a hint of cinnamon. Even if its just a teaspoon, it could blew me away. But since there's only me and Mom at home, I often ended up feeling guilty of eating too much. If only our 20 cats have 'cakes' in their diet *sigh*.

Now this recipe is worth to try. I am not saying its the best because I think I've eaten an apple cake even better than this but I love cakes with crumbs or streussel topping. Its just added some texture to your cake. And make your own caramel, instead of just dumping it all in the mixing bowl. Heat some brown sugar  with a couple tbsp of water, bring it to boil, let it cool then add in some apples before folding in to your batter. 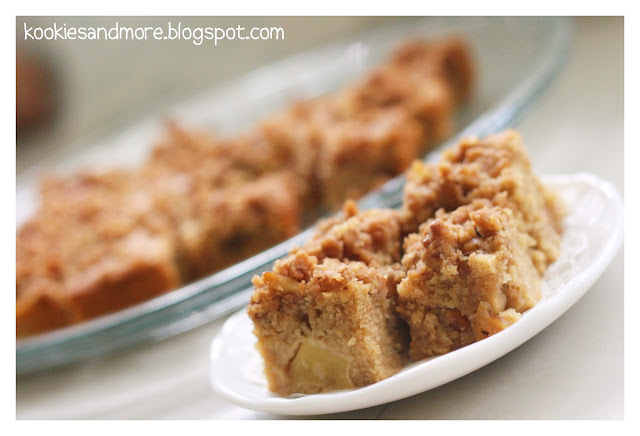 For the crumbs topping;

*There's caramel drizzle in the original recipe, but I decided not to use it ;) 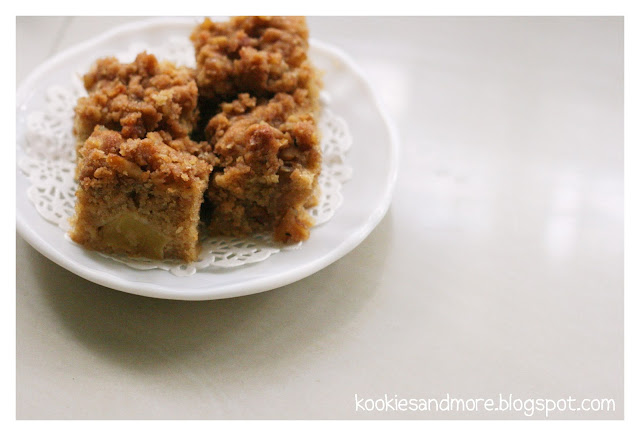 This is for my sister in Dubai.

You know,before she move to Dubai, she never had the chance to cook or bake that many as me or Mom would always get our hands first on the pan. Only that after she got married, and live in Jb with Mom, she started to cook most of the time. And now in Dubai, with a husband to feed, she started to get all 'Martha Stewart' everyday!

When she asked me for a good marble cake recipe, I know I did baked one. But wasn't that sure if I posted it up online. Checking back, nope, I didn't.

So this is for you sister albeit you already baked one hehe. Because this is a KEEPER! A really good marble cake ;) 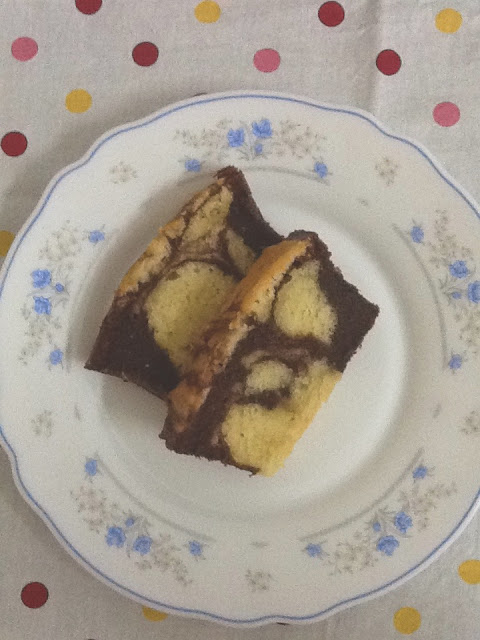 My husband is one of the type of people who had zillionth ideas on business. Me on the other hand was never exposed to business, only that I kept on saying "businesswoman" in my primary school progress book. And I thought businesswoman=news presenter! Bummer.

So he kept on pressuring me doing this and that and all I said was to take it slowly. Instead of going straight to Dessert buffet (wah that's a big hint!), I told him I will start doing favours for weddings or parties.

introducing Little Favours! A little something for your guest, perfect for birthday party, engagement, wedding, akikah/cukur jambul or any private event! Email me at kookies.order@gmail.com for T&C and more info ;) 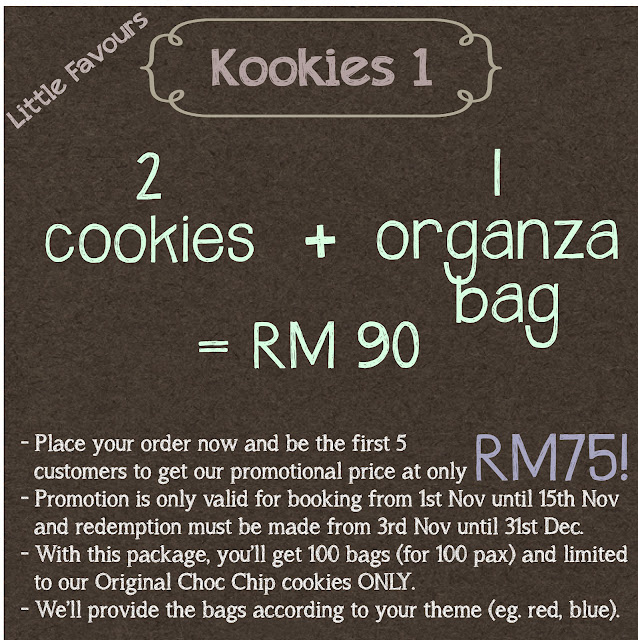 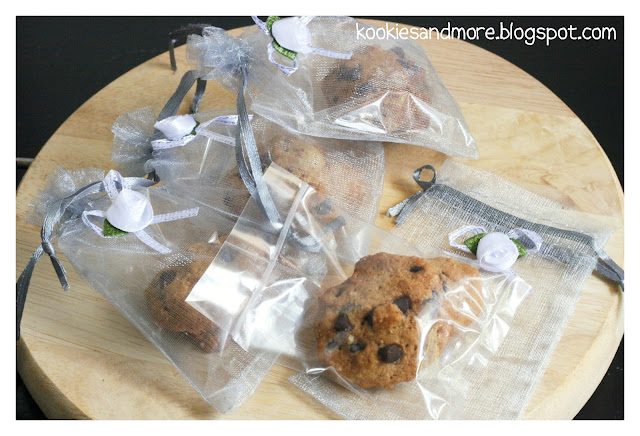 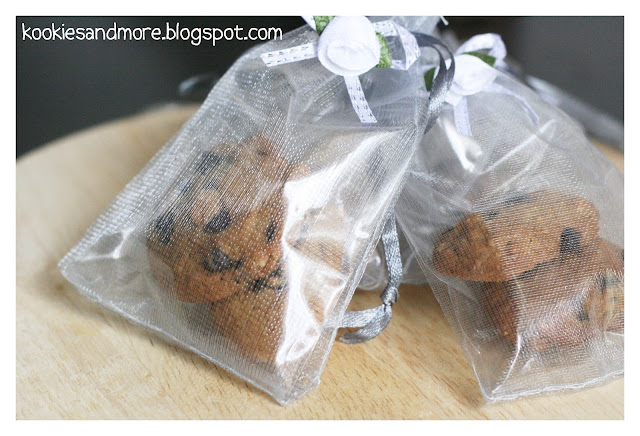 To those who followed us on FB must knew that we moved to Johor Bahru recently. Yes I know I didn't update that much in this blog, merely because in the first place, it was meant for my baking adventures.

And I am still contemplating. 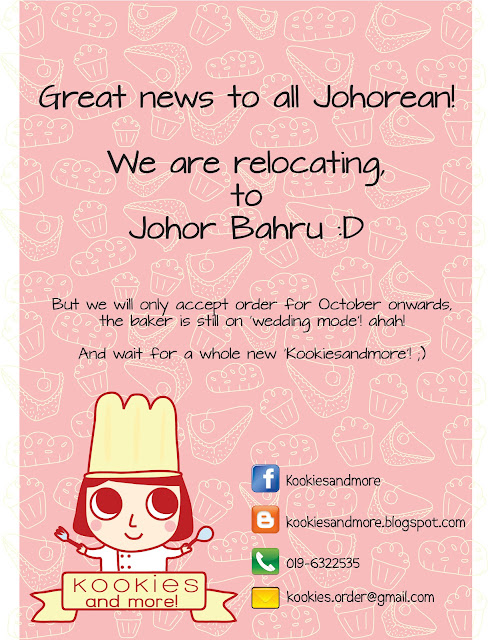 Sorry for the long silence :( Still figuring out on few things.. 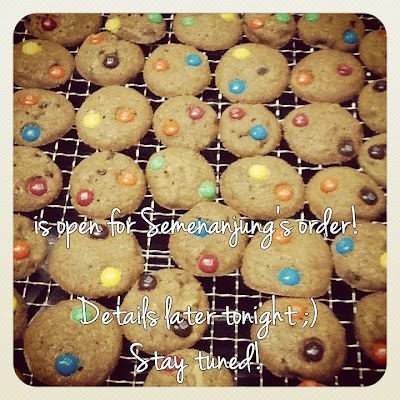 Good news is we are back in Semenanjung for Hari Raya's orders! Sabah's order is still open though. But since a lot of people requested to have the cookies in Semenanjung, might as well I take some whilst visiting the family.

Please do take note that we'll be taking limited number or jars this time. So, to avoid disappointment (or in another word; kempunan), please make a full payment within two days after booking to confirm your order ;)

No delivery, strictly pick it up yourselves (unless you choose to Poslaju it) from;

*Like us on Facebook for more info, or send me an email at kookies.order@gmail.com!
Posted by chezzem at 9:58 PM No comments:

I have been wanted to try ombre effect cake, eversince it became phenomenal this year. I did try to baked it for my engagement but I was too lazy to divide the batter to another three different tints. Haha. So this time, when one of my friend asked me to do a cake for her engagement hantaran, I told her I wanted to do ombre cake for her. Send her the picture and she said yes immediately.

But between ombre cake and ombre buttercream, which one is better?

So I made a trial cake; 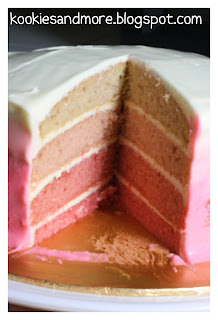 Ombre cake. I used a vanilla cake recipe for this one, don't remember which one, but the cake was a bit bitter. Maybe from the baking powder?

But luckily my friend asked for a red velvet cake, so I made her Roses cake with ombre effect. 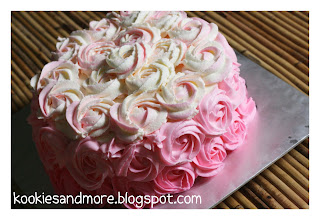 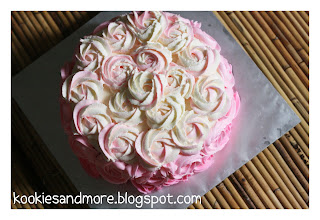 Definitely my favourite. And I used the leftover cream cheese filling for the topping as well. 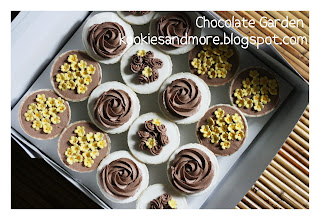 And she requested for the same design from Purple Garden, but instead of purple, she wanted it to be in choc. So here goes :)

Thanks Fai!
Posted by chezzem at 10:54 PM No comments:

Before I start, I'd like to clear something up - sometimes (or most of the time) things that you have planned, that you thought would be perfectly goes smoothly, might just crushing you, bit by bit. And you might ended up of having nothing at all.

One day, I was perfectly baking at home for families, then the anticipation grew and so I began baking for others. Until one day I just kept on having meltdowns in the kitchen.

It was fun. But I don't get the fun that I used to get back then.

Or maybe I was stressed out with few other things at the moment, which at times might look the best choice but most of the times made me ponder, 'Did I made a good decision?'.

So yeah, whatever. I am here.

I was feeling mellow one day, my cousin brought this local carrots that was oh-so-sweet, left almost rotten on the rack (all of us forgot to check and keep it in the fridge!) and so I decided to bake, a carrot cake!

But this time, I went for something that was out from my comfortable zone when its come to carrot cake, I searched for a new one, The Ultimate Carrot Cake as what they claimed. 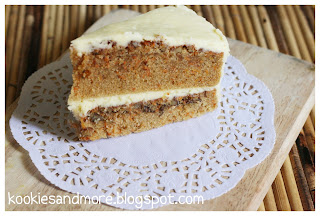 From cupcakes to cakes
From cookies to pavlova
Currently based in Johor Bahru, Johor.